Step Into The “Wendyverse” 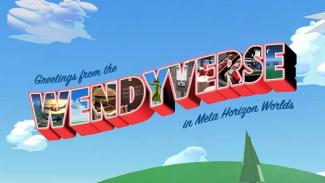 Wendy’s® has become pretty well known for our Twitter game, staying ahead of trends and even setting a few ourselves. Since then, we’ve been connecting with our fans where and when they are showing up on platforms across the internet. Wendy games with her friends on Twitch and chats with the crew on Discord, and now she’s the only QSR to dive headset-first into the world of VR with the Wendyverse™. With five worlds available now in Horizon Worlds, there’s plenty for fans to explore in this next dimension and it’s time for YOU to jump in!

How to Get To the Wendyverse

If you’re 18 or older and based in the U.S. or Canada, and you haven’t already, download Horizon Worlds (bonus: the app is free). To travel to the Wendy’s world from inside Horizon Worlds:

○  Turn over your left wrist and select the three-line icon from the Personal Menu, and then select the pin icon (toward the bottom)

○  Use the virtual keyboard to search for “Wendyverse”

○  Click the picture to travel to the world

What is the Wendyverse?

Now what should you expect once you get into the Wendyverse? One of the first virtual realities the Wendy's franchise debuted was the Wendyverse Town Square. In it, users can play cheeseburger shuffleboard, say hi to the wacky, wavy inflatable arm-flailing fry guy, and even ride a fountain of Fanta® to the roof.

After that, you can head over to the Buck Biscuitdome: a sausage, egg and cheese biscuit so big, there’s an entire basketball stadium inside it. Wendy’s debuted this during the Final Four® in partnership with being the Official Breakfast of the NCAA®. You can sink half-court shots with the Breakfast Baconator®, shoot t-shirt cannons on a friend’s avatars or toss giant French fries into enormous Frosty® cups - it’s a slam dunk of a realm for fans. The best part? You can even cut down the net after scoring the game-winning shot.

And since April, the Wendyverse has only grown bigger with the launches of Sunrise City, Frosty Mountain Village, and Spicy Nugg Island — three brand-new worlds loaded with new games and fresh adventures.

In Sunrise City, you can experience Wendy’s breakfast as you climb a bacon ladder, dodge coffee stirrers and ride a flying biscuit to the Wendy’s castle in the sky. Once you conquer your kingdom, you can feed the court, battle on a tightrope, and ride a seasoned potato hang glider all around the world.

After that, you can hit the slopes in Frosty Mountain Village on the side of the biggest Frosty ever - literally, it’s a mountain of Frosty. So, strap on those French fry skis or grab a snowboard and pull off some super sweet jumps. Or just chill in a mountainside Frosty-ccino® hot tub before heading out back to roast Spicy Chicken Nuggets over an open fire.

Speaking of Spicy Chicken Nuggets, why not kick back and ride the lazy river around Spicy Nugg Island? Whether you’re looking to be the king of Biggie™ Bag cornhole or you just want to be the next maverick playing slow-mo beach volleyball, Spicy Nugg Island is the hidden digital oasis you’ve been waiting for - virtual Wendy’s paradise

Hungry for more? The Wendyverse will only continue to grow with new worlds, updated worlds, new games and more. In fact, our CMO, Carl Laredo, has a few tips for brands that might be looking to follow Wendy’s lead into the VR space here: https://www.facebook.com/business/news/top-tips-for-brands-looking-to-jump-into-the-metaverse

See you in the Wendyverse!